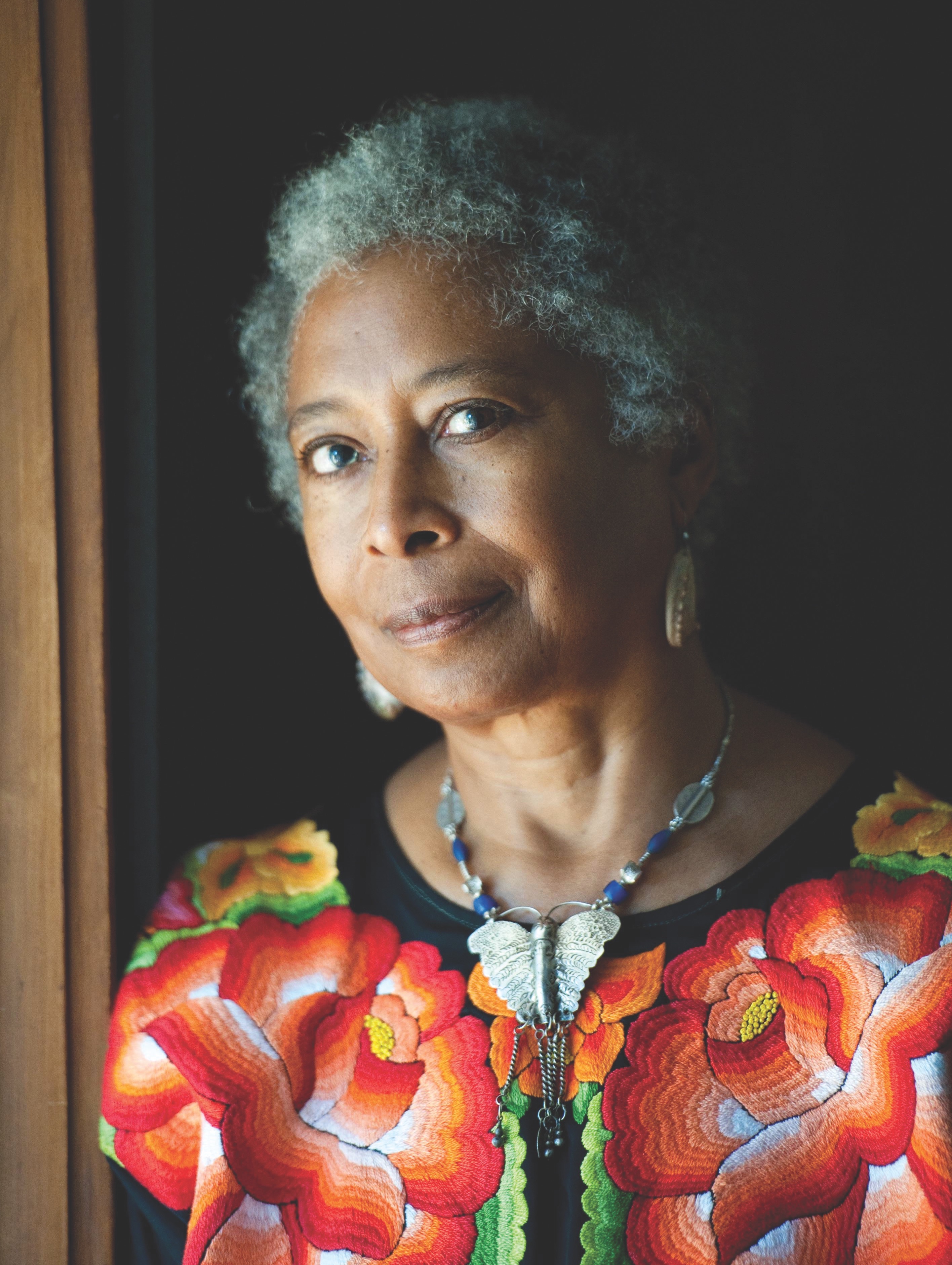 Summit (S): In an interview you gave with Amy Goodman a few years back you talked about the “huge machine”—capitalism and empire. What is the trajectory of this machine? Is it growing, or is it in decline?

Alice Walker (AW): I see it being challenged, often successfully. And it has to be challenged and has to be forced into decline just for us to live. There was a time we thought that if we just waited, the trajectory would decline without anybody having to do anything because evil eventually collapses. But I think catastrophic global change is making it that much more necessary for humans to stand up and act in defense of the earth. The earth, then, becomes an ally in going up against the machine.

And we see, in these new movements all around the globe, that people are awake. This is one of the finest times to be alive ever, because people are waking up and they are eager to discover new ways to confront the machine. People are resisting.

Living by the machine, becoming cogs in the machine—they’re discovering that they are earthlings. This is one of the most wonderful things for us to awaken to: that we’re earthlings and that all of these divisions in humanity are absurd.

One of the things I love about the honoring of ancestors is that once you leave this plane as a living human you become everybody’s ancestors. Ancestors are not segregated. They have no boundaries and they have no patience with this trivial way thinking; of trying to make earthlings feel like, even though we all come out of the same earth, that somehow we’re so different that we can’t get along. I mean, what a ridiculous idea.

And this is one of the values of this place, Hawai‘i. The willingness to acknowledge all this variety is such a beautiful thing, and the machine doesn’t like variety. So if we insist on variety—really insist on it—that will break the machine.

I don’t actually live here. I have a house I share with a Hawaiian musician on Moloka‘i. But I’m rarely here. I love Moloka‘i partly because of the resistance there to the machine. Moloka‘i is very vibrant in its understanding, in its love for itself and for what it truly is. Everybody there knows who Hina is, everybody there can tell you about the winds in the calabash, everybody there can talk a good story about the hula. But it’s not for show, it’s not a performance.

I think one of the things I really find distressing here on O‘ahu is that the culture is for sale, you know? I mean there are obviously people whose culture is not for sale, but the way it is often marketed is very destructive. It runs contrary to the kind of work where you encounter the true necessity of change; ancestor-driven.

I love Hawai‘i because it’s one of the places on earth where people, even if they are not indigenous genetically, have a respect for the indigenous wisdom. Indigenous wisdom around the world is always about the earth and about the sacredness of where we are. We are in the most sacred place—the earth is so incredibly dear. And it is painful to see how few people realize or even think about it. And it’s partly because the machine has forced them to work so hard, to have so many kids, to struggle and often they’re blinded by their very lives. This is a crime, and it’s a crime of the machine.

S: Why is this message important now?

AW: What happens in Hawai‘i has happened all over the planet, and we’re all Hawaiians in that sense. I think what Hawai‘i helps us with, though, is that there seems to be more of an awareness and more of a dedication, and when people come here I think they feel this. They have a sense of the ways in which they can, very humbly, reconnect with who they are.

For instance, re-learning your language. It’s so incredible to think that people, once they lose their language, can’t even complain sufficiently because they don’t have the words from their own language to say what it is they don’t like.

So the work that’s required to reconnect us to our real selves involves having our own language. This is a place where Hawai‘i is a very good teacher. It’s daunting to think about re-learning a language you never knew, where people have forced you not to know your own tongue. It’s horrible. It’s what happened to Hawaiians. Hawai‘i’s example of taking back its native tongue is something that can inspire other indigenous people around the world. Ultimately, all the work that we do is to help the world. It is to help the mother, to help the earth in her struggle to be whole, to be health and to not have people exploding the heads off of mountains, despoiling the rivers and fouling the oceans. The task of humanity forever going into the future for as long as we’re here is to resuscitate and rehabilitate the planet. I mean, that is just the work.

The people who think that the task is only to get more oil and more gas and steal people’s water and take off the topsoil and destroy the mountains—their days have to be numbered. I think, collectively, we can manage to number those days and make them short. And we can do this without the kind of violence that people used to think you needed. I so love this era because of things like the Internet, for instance, and because of the quickness with which people can communicate their dissatisfaction and their anger and their sorrow and their grief.

I have so much faith in us. We are the children of the earth. And we are her thinking, walking beings, and we belong to her. I have faith that people will awaken to that truth. Part of this work that we’re doing is to hasten that awakening.

And that’s one of the great things about Meleanna’s film too. What could I do except support her? Here is someone who is giving it all that she has, and she’s clearly devoted to something so large and something so sustaining for humanity and for all the creatures. Once humanity really awakens, it can’t help but care for all the other beings, because this whole hierarchy thing is ridiculous. To think that we are somehow entitled to do whatever we want with this planet because we wear clothes and drive cars is ridiculous.

S: Can you talk about your experiences in Cuba and if you see any lessons to be learned from your time there?

AW: Cuba is another one of my favorite places on earth. I have great love and admiration for the people, great love for Fidel and Celia Sanchez—who was very little known. Without Celia Sanchez there would not have been a revolution. Heidi Santamaria, Armando Hart, Camillo San Fuegos—all of these revolutionaries were, I think, really very pure in heart. They really cast their lot with the poor of the world.

I think that Cuba would be very different if the United States had not imposed what is, really, a horrendous embargo. But even with the embargo it’s an amazing place, and I think the people of Cuba are showing the world a different way. I think many people are frightened of Cuba because it chose communism and socialism as its path.

When I was an 18-year-old student I traveled to the Soviet Union, and before that I had gone to a world youth festival where I’d encountered both Cubans and Russians. The Cubans were just coming into consciousness about their socialism. The Russians were heavy as lead. They didn’t dance, they were all wearing gray. The Cubans, on the other hand, were dancing every chance they got. They were full of life, full of spirit. In other words, there are many different socialisms in the world, and many ways of being communists too. So I’m not frightened at all of any direction they choose because it’s their right, you know?

There was a period when there wasn’t enough food and everybody lost weight. I went there during that period, and they’d all lost 10 or more pounds because they had so little food. One child had just one egg a week. They were desperately trying to figure out how to grow soybeans so they could make soybean yogurt because they no longer had milk. What I see there is a society that cares deeply about its people and about its pride. That’s the part that I love. The dignity that you can feel when you are not dancing for the masters is amazing. When you dance for yourself out of your own joy, that’s dance. And when you dance to sell your island, that’s something else.

I’ve been to Cuba four times, twice to bring medicines because the embargo was—and still is—so cruel. They can’t even get the specialized film that doctors need to check for breast cancer—they couldn’t even get that from the United States. Luckily, other countries in the world have risen to fill that void. The suffering has been pretty drastic, but they’ve pulled through and I’m just so happy.

They tried to kill Fidel 638 times. They tried to assassinate this man, 638 times. And you look at all the other leaders of the world who are, as we speak, bombing people or poisoning their water, yet my government—our government—says nothing. I never think of Hawai‘i as being a state. I think of it as being a country, so that’s why I talk this way.

I love anybody who loves the land. You know if you love the land, I love you. And if you don’t love the land it’s harder to love you.